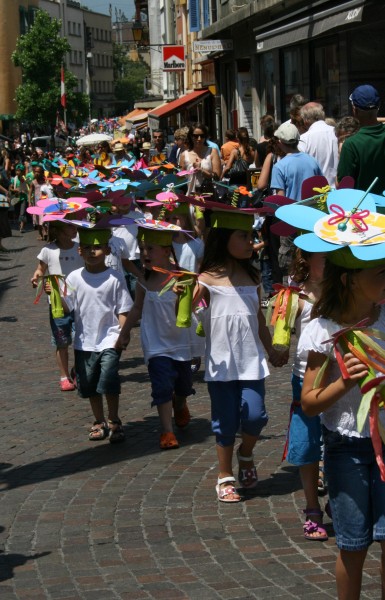 Living in Nyon has recently received a few questions from parents who are about to move to the area and who are considering putting their children into the local public schools.  For those parents who have questions you might like to know that the canton of Vaud has recently produced a helpful website with the key facts to public schools in Vaud. This information is in English with helpful charts comparing the Vaud educational systems with those of various other countries (including England).

Here is the link  to the site.

In addition for your information here are some of the questions this site has received and replies that parents have given.

Please note these answers come from the personal opinions of  parents and obviously experience varies according to each individual’s situation.

The photos in the article are of children from local schools in the “end of school summer parade”  in the centre of Nyon.

“Hello, we  have just arrived and are staying in Geneva this week to look at the area. We think that we will probably move to Nyon in January, and will put our kids in the public schools. However, we would like to visit one of the primary schools to discuss their integration programs. I have searched web sites and the Know It All Passport but can not find the address for a primary public school in Nyon. Can you help out? Thanks!

Reply from a parent

“In Nyon, you’re assigned a primary school depending on the street in which you live. The level of support for each child depends on the school and on the age of the child. The good news is that I’ve only heard positive things about the primary schools round here – we’re certainly very happy with Ecole de Centre Ville, which is in the town centre.

I don’t know about other primary schools, but our experience is that children in 2nd Year Enfantine (CIN2; ie age 5) who need help with their French get one specially-devised French lesson a week as part of a small group, plus help with vocabulary from their class teacher. In 1st Year Primary (CYP1; age 6+) this goes up to twice a week, and my daughter gets extra help – “appui” – for 45 mins on Wednesday mornings when she would otherwise be free to come home.

I don’t know what the catchment areas are, but I’m sure the Admin office for the Primary Schools of Nyon would be able to help.”

Question on  Geneva versus Vaud schools?

“In your opinion, would schools in the Geneva canton have better integration programmes for non-French speaking children, or are the schools in Vaud just as good?  In the US, there can be big differences in the quality of the schools and teachers within the same city.  Is that also the case in Nyon?  Is there a primary school (or schools) within Nyon that are known to be better with non-French speaking children?”

Reply  from a parent

“When we moved here, the relocation company assured us that state education in Geneva and in Vaud was of an equally high standard. I don’t know anyone who’s moved between the Geneva and the Vaud schooling systems, and I don’t know anything about the Geneva set-up, so can’t helpfully compare them. Maybe one of your colleagues has children of a similar age who are schooled in Geneva and who might be able to shed some light on the subject?

There are certainly lots of ‘international’ children in schools in Geneva. However, the area between Geneva and Lausanne (‘La Cote’) is also very popular with expats and there are children from non-French speaking families in most of the schools in towns and villages close to the lake. Once you head away from Nyon and into the villages, it’s more likely that children will be allocated to the primary school that has space for them, which might not be in their village but a bus-ride away. Likewise, specialised classes like French for non-native speakers, may be held in a different location, with children coming in from several villages nearby. Schools in Nyon and Geneva have a large enough non-native population that they deal with this ‘on site’.

As far as Nyon is concerned, again I can only speak from experience. We have friends with kids in a couple of different primary schools here (Tattes d’Oie and Couchant) and in villages nearby (Trelex/Gingins) and they are happy with the standards and the level of support they are getting. But there are no ‘league tables’ and I guess you have to go by how well you feel your children’s individual needs are met, which in our case has been really well. As Nyon is relatively densely populated, the schools are all pretty close together, and all have a sizeable proportion of non-native children, who enter at all levels. On starting at Ecole de Centre Ville, in the old town, both of my children had other kids in their class who spoke English, which made it a bit easier, and kids who didn’t speak French, so they certainly didn’t feel isolated. There are certainly quite a few English-speaking parents that I’ve got to know in the playground!

My best advice is to have a look round, decide which area you’d like to live in and have an informal peek at the schools nearby. At least that’s what we did!”

Reply from another parent

“I can only speak from anecdotal evidence but I have heard that the public schools are better in Vaud (and I think they came out better in a survey in a  magazine article, but this could have changed).  From personal experience our daughter arrived from England at the age of 10 here too (speaking no French)and the support she received in her Nyon school was excellent.  Having said this there are some things that take adjusting to;  you will find that the Swiss system is not the same as say in the UK where there are more parent/teacher associations and involvement in school life, here the parents do not seem to be given the opportunity to get involved in school activities.

As to which school to choose according to which area the school is in or the quality of the teachers in each school  well like everywhere in the world,  there are good and bad teachers in every school, public or private, you could choose a school because of a good teacher etc only to find they leave the next year and don’t forget Nyon is a small  town there aren’t really any “ghettos” as there can be in some U.S. towns.” 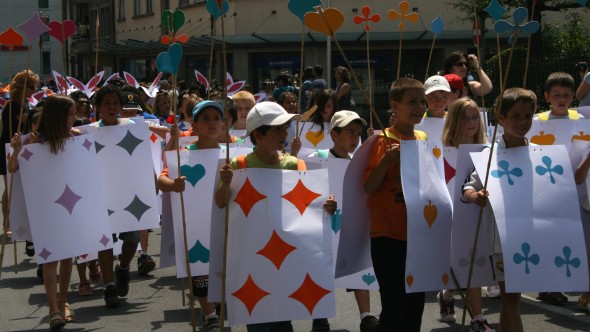 Entry date/Cut off date  for children to local schools.

“I have a 3 year old, currently at pre-school. I understand that their are 2 public primary schools in Nyon. (We will be looking to send them to public school). Am I able to choose which one and are they much the same? My daughter like us only speaks English.    She will be 4 on September 2nd 2011, can she start Primary school in 2011, or is their a cut off age/date?”

” Our kids go to l’Ecole de Centre Ville de Nyon, which is our local primary. They were 4 and 5 when they joined (one in Premier Enfantine, known as CIN1, the other in Deuxieme Enfantine – CIN2) at the beginning of the school year 2009. Although the first couple of months were pretty tough – new language, new town, new friends – they settled faster than I’d anticipated, and are both on their way to being fluent in french, having started with none at all. There are quite a few children at school who come from non-french-speaking households, and the school is well set-up to help them, with extra ‘French for foreigners’ classes from CIN2 onwards. In fact, there were a couple of other English-speaking/bilingual kids in both classes and I’ve met even more British/US mums in the playground this year.

As far as I understand, you’re allocated the school nearest to where you live – there are quite a few evenly spaced around town, and they all look quite nice. We certainly had a nose around our school before we signed our rental contract, just for peace of mind. For more information on the school system, the best place to look is here . When we started, children had to have turned 4 by 30 June of that year to get a guaranteed place in CIN1. I’ve met a couple of people who appealed and had younger children accepted if they had already been at school in their country of origin or if their birthdays were in the late summer, but I’m not sure how this works or if the cut-off date still stands. The academic year 2011/12 starts on 22 Aug 2011 so I’d imagine you’d be in with a chance especially if you can prove that your daughter has been assessed as ‘school-ready’ by her current teachers.

If not, there are quite a few preschool options available, both French and bilingual, some semi-run by the local council, others private. We’re pretty lucky in Nyon, as the childcare situation isn’t as dire as it is in other cantons, although it is still quite a way behind the UK in terms of cost and number of places available – see this link  for details of the ‘state’ provision. As it happens, I went with a friend to pick up her kid from the Croque’Lune the other day, and it looked really good. This sort of childcare is very carefully regulated, and they have strict rules about proportion of staff to children of various ages.

The cost of the ‘state’ nurseries here in Nyon is means-tested (as is the cost of the lunch-clubs “Classe Tartines” for school-age kids) but I don’t know what that means in terms of actual price. A good starting place to find information about private nurseries in and around Nyon would probably be the Know-It-All Passport, which is a directory of all things expat in Geneva/Vaud (see www.knowitall.ch).
Probably the best people to ask about preschool/creches would be the Moms in Vaud group, who meet up every Weds morning and have an active Yahoo group .  There’s also a Mums and Kids group called GEMS (Group of English-speaking MotherS – !) who meet weekly at the Westlake Church in Nyon and seem to have a great time – their blog is at  and the Mums and Kids section of the International Women’s Club of Nyon 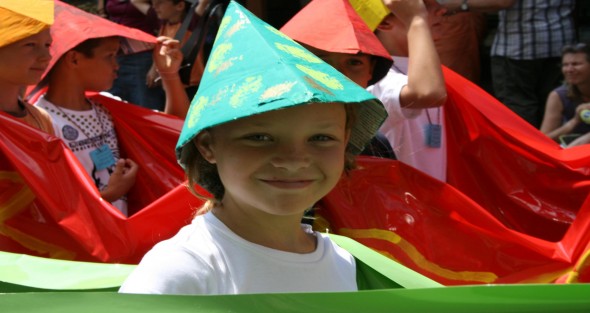