The annual GAOS (Geneva Amateur Operatic Society) traditional Christmas pantomime (usually performed in Geneva) will take place in Nyon this year at the Théâtre de Marens! The GAOS panto is a fun way to kick off the Christmas festivities and it contains all the usual elements an audience can expect to find in a British “Panto”. From well known catch lines, audience sing alongs, fun, corny jokes and great costumes, it’s a fun afternoon or evening’s entertainment for all the family. Matinée performances at the weekend. Tickets are selling fast!  Details below. 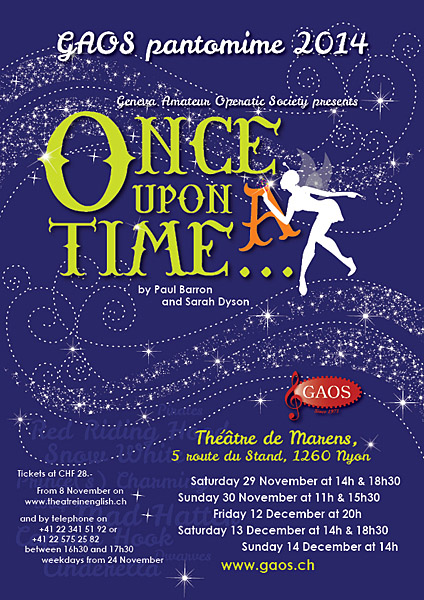 This years panto is called “Once upon a time” – here’s the synopsis below provided by GAOS.

“You may not realise it, but this is traditional British pantomime containing all the usual ingredients ― except that Cinderella and Snow White are now all grown up and have children of their own! Cinderella’s daughter Lottie is about to get married to Snow White’s son Prince Marvellous, which also means that evil is about to be banished from Pantoland. But the wicked queen, Evelyn, sets out to stop the wedding by transporting Princess Lottie and her two assistants, Nick and Nack, away to the furthermost reaches of the back of beyond. Prince Marvellous, his friend Jack and the cook, Gertie, set off to save them. Along the way, they have adventures with various characters from different fairy stories. You may recognize Captain Hook, Red Riding Hood and the Alice in Wonderland, not to mention the March Hare. Will the Prince and his companions succeed in rescuing Lottie? And can their wedding finally take place?”