We will leave you with a resumé of the festival from today’s press conference and a couple of videos from Sunday afternoon. If you are on the festival grounds, enjoy the fireworks! 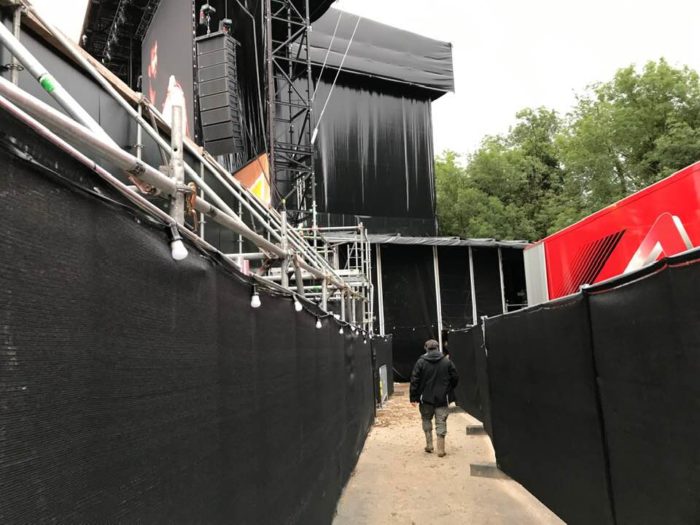 Photo above – behind the scenes

Saturday night had been particularly difficult as not only was there a deluge of rain, but Shaka Ponk (one of the headline acts) had to cancel their concert due to illness and this wasn’t confirmed until 16:30. Thankfully an improvised concert was arranged at the very last minute by Stephan Eicher (who had played earlier on in the evening). Musicians, technicians and organisers worked hard to produce a stand-in concert. In a matter of a few hours, the Paléo Orkestar had been created and they had recruited Robert Charlebois, DJ Zebra, Melanie Oesch, Tire le Coyote and even a festival goers’ choir. Rossellat said everyone was heroic as they worked so hard to get this concert up and running.

He also explained another tricky moment when the band “Live” had to land in Lyon (due to the storm) and then had to get a taxi to Nyon. They arrived 15 minutes before they were due to play. Yet, all the volunteer staff had set everything up for them in advance and even done a sound check for them, another heroic moment in the history of Paléo.

There had been a new departure for Paléo this year with the introduction of a circus act in the Dome and this had been a success.

When asked how Paléo could reduce its environmental impact even more than some of the measures in place – recycling and washing the drinking cups, participating in the “Food to Go” App etc, Rossellat replied that they were always looking at ways to improve things, however the best possible way would be if people came to the festival by public transport. This would help enormously. There had been lots of measures in place to encourage people to use public transport (which is free to the festival from Nyon) but many people still wanted to use their cars.

Rossellat was also asked if they would ever have a mega big-named act at Paléo. He said it was unlikely, mainly for logistical reasons. A really big act means that it affects the programming as they need 3 days to set up the stage and then 2 days to take it down again!

Despite the weather it had been a successful Paléo and they are already planning next year’s festival (the 45th!) which will take place from the 21st to 26th July 2020. The music in the Village du Monde will be from West Africa.

The line-up will be unveiled on March 24th and the ticket office will open on April 1st, 2020.

Videos below – The Chamber Orchestra of Lausanne and Jane Birkin, a French icon,