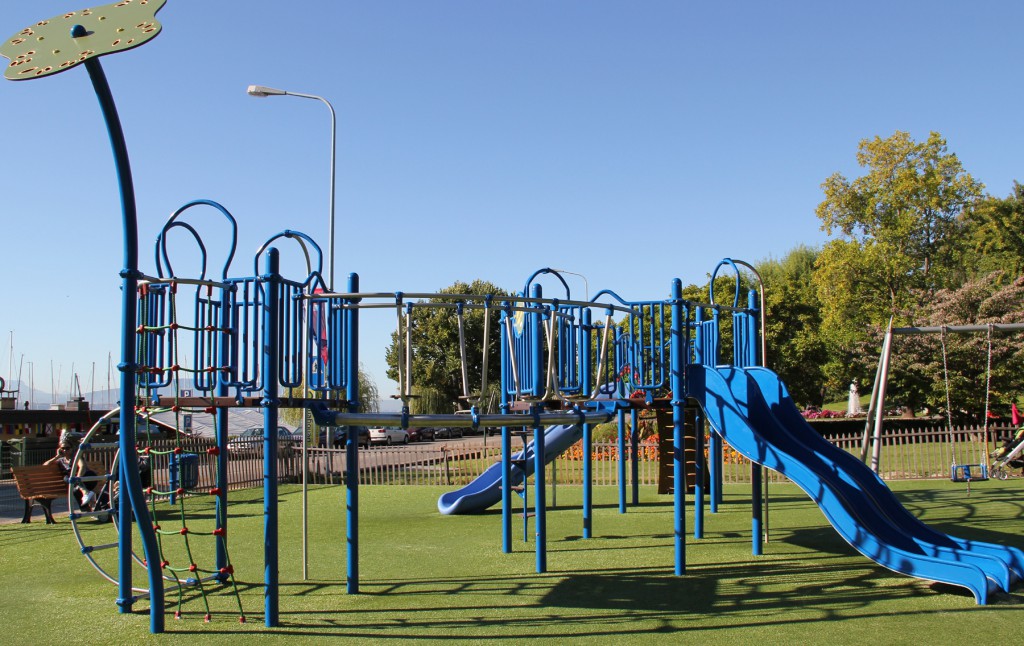 Here’s a quick round up of local news taken from La Côte newspaper plus events coming up in the region.

Drop in CGN passengers numbers due to poor summer weather

CGN (Compagnie Générale de Navigation – the company that run the boats on Lac Léman) announced that due to the bad weather over the summer months, the company saw a drop in its passenger numbers of around 40,000. CGN hopes that the good weather in September will compensate for the lacklustre summer and numbers will increase during this time. However, the company did see a strong rise in passenger numbers on the Lausanne to Thonon route due to passengers travelling to France to shop to take advantage of the strong Swiss franc. Note: CGN switched to their autumn timetable on the 11th September.  See timetable here 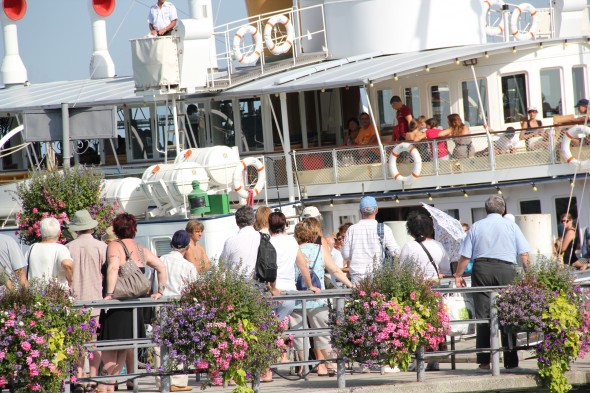 The buvette of La Plage des Trois Jetées in Nyon closed unexpectedly on the 31st August due to various circumstances. However the voluntary Association of the Bains de Trois Jetées will be re open their small café and sauna in mid October. Check out the site of this association to keep up with their latest news.

Residents living nearby and on Coppet’s main high street, were woken up to a loud noise in the early hours of  Saturday  morning on 3rd September due to a large and ancient “grange” unexpectedly collapsing and falling into the street. Scattering stones and debris everywhere, the street became dangerous and impassable so it was then closed off  to the public by the police. Fireman from Nyon’s fire brigade attended the scene along with search and rescue dogs to ensure there were no casualities due to the incident. Thankfully there weren’t and the reason for the collapse of this old building which dated back to 1784, remains unclear.

New playground for children on the Rive 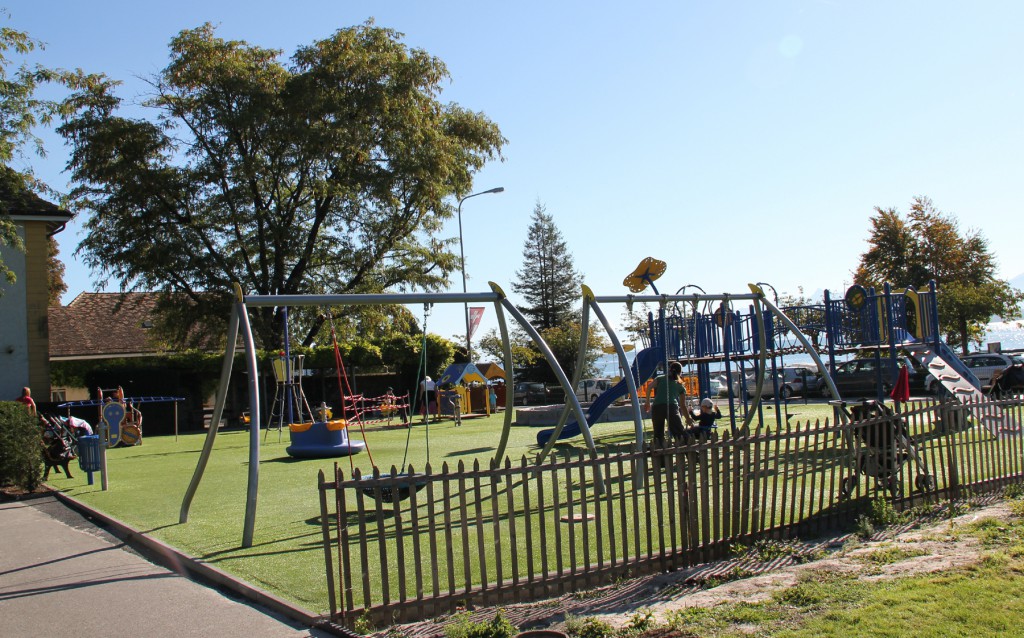 There are also benches in a shaded area for family picnics. 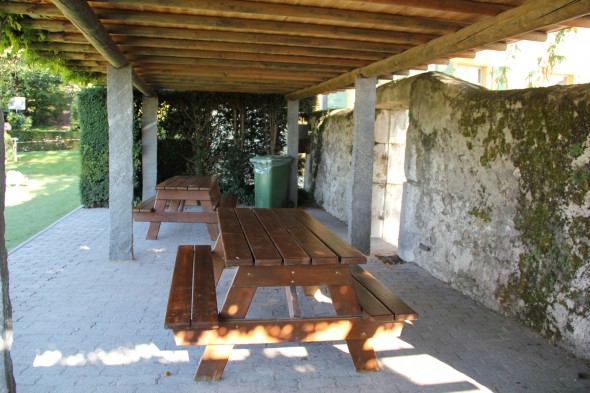 Nyon council have spent 270,000 francs in renovating this area. Note : Want to know more about child and parent related activities in the area? Check out the Moms in Vaud site or click on the Know it all Passport on the right hand side of this site. 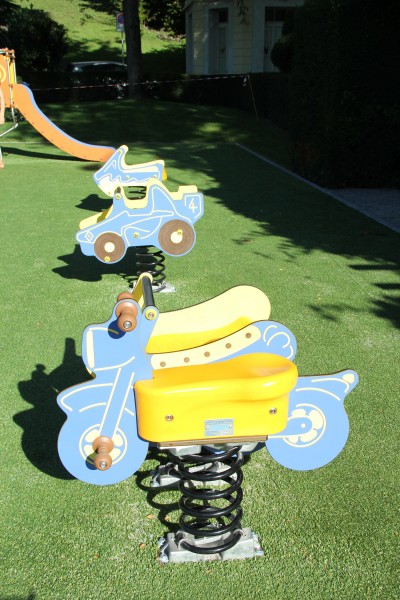 After many years of discussion and debate, the go ahead has now been given for Migros to construct a new shopping centre at La Gravette (where the Migros Brico Loisirs is situated). Plans for this centre include a supermarket of 1500m2,  an electronics store of 500m2, a restaurant and a new Brico Loisirs with garden centre. There will also be three commercial areas in the centre which will not be part of the Migros chain. The first phase of work is due to be finished by Autumn 2012.

Wine train this weekend.  On Saturday 17th September Morges’s petit train will wind its way from the débarcadère (boat embarkation point) in Morges, up through the  pretty wine villages of La Côte. This is a great opportunity for passengers to take in the fabulous scenery and to visit various wine cellars such as Vufflens-le-Chateau among others.  For more information see here.

Note: Nyon will have its own Fête de La Vigne on the 24th September, more information on this to follow.

Circus in town.  The Knie circus is in the area and will be in Nyon from the 16th to 18th September.

On the 30th September there will be a debate held at Globiunion in Nyon entitled “Croissance de L’arc lémanique – Chances and Risques”.  As the arc of Lac Léman has seen rapid growth over the past few years with many multinational companies moving in to the area, the region and the local economy has been boosted by this growth. However this growth has brought challenges too in terms of infrastructure, housing, education and the integration of the new arrivals. The debate will discuss these challenges and it is open to everyone (registration required).  Speakers include Philip Jennings, Secretary General of the Global Union, both mayors from Copenhagen in Denmark and Utrecht in Holland  (they have been invited to recount experience of growth in their own cities). Other speakers include Jennifer Ackermann from UNIA, Frederique Reeb-Landry from Proctor and Gamble, Devendra Rana from WWF, Cyriaqu Sendashonga from IUCN and Francesco Della Casa Cantonal Architect from the Canton of Geneva. For more info see here