The Golden bar, the Golden rule of Paléo and Announcing the artists on the big stage

Paléo starts today the 19th of July. This will be the 41st festival. It began as a small folk event in Nyon’s community hall back in 1976 and has since evolved into one of Europe’s biggest music festivals. Part of the whole Paléo experience is when Mik Clavet runs on to the main stage with his long hair flowing, and microphone in hand to announce and welcome the next performance. Living in Nyon went to chat to the man who is often nicknamed “Mr Paléo” and who has been announcing the bands for 14 years, to find out more about the man behind the mike. 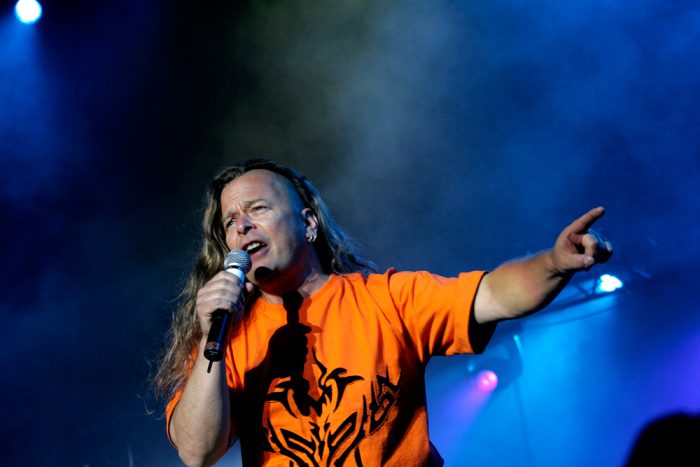 Mik, originally from Québec, was about to embark on a European tour when a chance meeting with a friend of Daniel Rossellat altered his course. The friend told him about a festival in Nyon that maybe he could help out at with some volunteering or work. So Mik took up the suggestion and arrived in Nyon in November 1990. Like many new arrivals in Switzerland, Mik went through “sticker shock”; when he saw the prices, he even sent a supermarket receipt back to his mother in Canada, to show her how expensive things were. And there was a bit of culture shock too – although Mik already spoke French, he quickly had to learn new phrases and words that were completely unknown to him in his native French Canadian.

“I also felt like I was in a permanent theatre here in Switzerland,  I was surrounded by different accents, different nationalities, I was walking past Roman buildings and friends of mine were living in houses that dated back to the 16th century. I then realised what a young country Canada is, compared to here.” 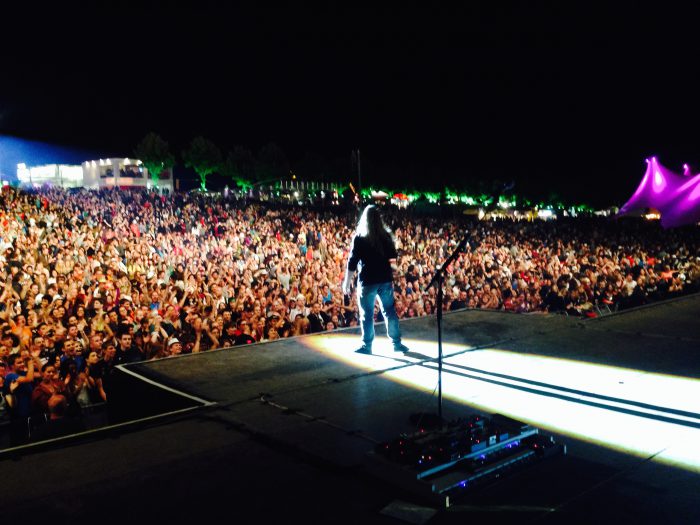 Yet Mik quickly succumbed to the charms of Nyon and surrounding area and began volunteering at Paléo. As Mik can turn his hands to most things, he began helping with the infrastructure of the stages. “At that time all the stages were built by volunteers. Things have moved on since then, concerts are bigger, stages are bigger, there’s a lot more technical stuff involved so it was inevitable that there would be a time when the professional companies needed to take over. Now teams are brought over from Germany to do this task”.

However each stage still has its own behind-the-scenes volunteers teams that run the day-to-day operations.

“As you work on everything together late into the night, you almost become like family during the Paléo period. So much so, you want to work with the same team the following year which is what I did. I worked in the Dome area for many years starting as the speaker/announcer and ended up becoming the stage manager. I loved it. Then, one year, I was ask to be the announcer on the big stage, I wasn’t that keen as it would be hard to quit the Dome “family” but at the same time, I knew it would give me the opportunity to experience something else. Although, I knew I would then have to introduce the really big bands. I was used to working behind the scenes most of the time, so if I accepted, it would mean I would definitely be plunged into the lime-light.

Moving to the Grand Scène

“On the other hand I knew it was a privilege to be asked. It was a promotion. So I agreed to move and work on the big stage and announce the bands that appeared each night. I was nervous the first time I did this and I have to say my heart still skips a beat before I do it today – when you walk on the stage in front of 40,000 people, it’s exhilarating but nerve wracking! However I make sure I just do my job and leave the artist/s to get the biggest roar. I only take around 20 seconds to make my announcement, I don’t need to elaborate, the fans know everything, there’s no point on telling them that the artist has sold millions of albums etc, they know this sort of stuff already. I make the announcement with pride, and it’s a brilliant moment for me when I do, it’s like lighting a match, the fire has started on what we all hope is going to be a great concert and great night.

“Even for those short 20 seconds of announcing, there is still quite a bit of preparation involved. We have to test the microphone and deal with the artist’s management to see if they even want to be announced on to the stage, some say no, some are happy for me to go ahead, some say yes and then change their mind 5 minutes before. This happened with the Stromae concert. This concert was one of the biggest Paléo had ever seen, the place was completely packed, the level of anticipation in the crowd was enormous. So, although I couldn’t announce the man himself, I did walk on stage with a suitcase pretending to be lost, I turned to the crowd and said “I’m looking for Mr Stromae. Have you seen him?” You can imagine, the roar that followed that, was deafening. 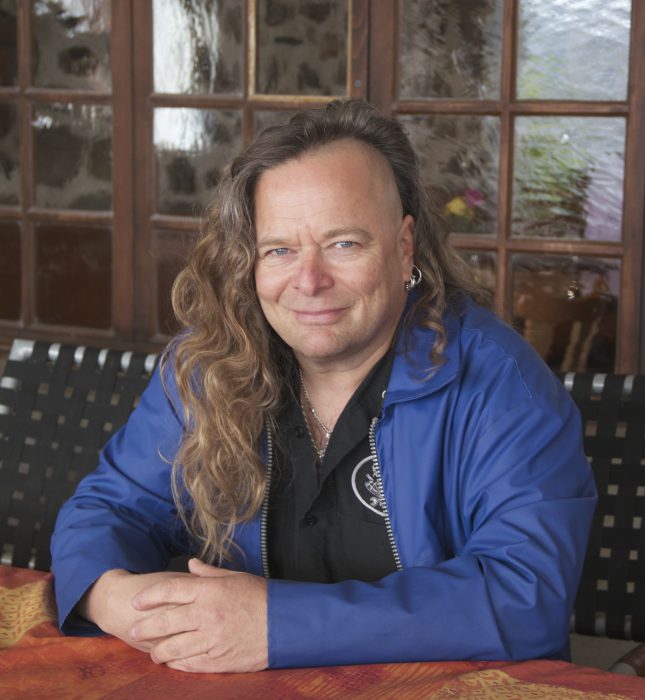 Primary duty of of the stage announcer

“On a more serious note the primary duty of the announcer is not really to announce the bands: It’s vitally important for someone to be there to transmit, serious and clear messages out to the Paléo grounds. These messages can help with crowd control. For example, we ask fans to stagger their departure after a concert so not everyone is heading for the exit at the same time, or in cases when the weather can affect the festival, such as during a bad heatwave a few years ago when we kept reminding everyone to keep drinking water and stay hydrated.

“Behind the scenes there’s a whole team of people, and cameras keeping an eye out on the flow and movement of the crowd, we are constantly looking at it for safety reasons.  There is a grid printed out at each festival for those involved to indicate concerts that might be tricky for security reasons or those that are predicted to attract big or certain kinds of fans. These concerts are graded into various colours, red, orange etc according to the security level. The set at the Ramstein concert involved fireworks, so we had to be ultra vigilant for that one.  Regarding security, Paléo hasn’t sat on its laurels over the years – it has a relaxed atmosphere but it is constantly reviewing security issues, so much so, other festival organisers from other countries come to Paléo to see how security is handled.

“As to the artist themselves, they’re all different, some artists come and say hello and kick around the backstage, some just stay in the dressing rooms until it’s time to perform,  I have met some really interesting singers and bands over the years, so it’s difficult to favour some over others. Seasick Steve was just a delight to work with, as was Ben Harper and many other artists, too many to mention. The team that operate the Grande Scène have their own little community behind the scenes, we’re called the “Golden Team”, and we even have our own bar called… of course the “Golden Bar”. Sometimes the artists come and join us in the bar after the concert.

“I also have my own golden rule at Paléo. Don’t arrange to meet up with people at the festival itself, it never really works, either one of you has discovered a great artist and is listening to them at the appointed hour and they don’t want to break off to leave, or one of you is at the opposite end of the grounds so can take 20 minutes to arrive. Or as often happens, you never find each other and spend ages calling or sending messages on your phone trying to contact them, or finally, it can happen that you bump into friends who ask you to join them, but you can’t because you have a prearranged meeting with someone else. Keep things simple and spontaneous.

“I will be announcing the bands again this year, but I am not sure how long I will continue to do this. I don’t want to overstay my welcome, it may be time to hand over the mike to someone else at some point. Since I started with Paléo I have also worked with the infrastructure at Caribana and Visions du Réel. I take two weeks off to volunteer at Paléo and then after the festival I take three weeks off for a holiday in Québec.

“However, I will definitely be staying around in Nyon, as I am Nyonnais by adoption now.  I am Vaudois – I have a son here at school and I feel very much part of the community. Because most people that work at Paléo are volunteers, you can forget they have day jobs too, and you don’t always know what these are. I was once having a beer with another volunteer behind the scenes at Paléo and then a few months later went to the doctor about something and realised that same volunteer was also my doctor!  If I am wandering round the Saturday market in Nyon I end up chatting to a lot of people in this town – it’s all due to Paléo and to working at these great festivals”.

The gates open today at the 19th July. See line up here and look out for Mik on stage!