Started in 1994 by François and nini Pythoud, Nyon’s circus school has grown to become an important part of the cultural life in Nyon and the region. Over 300 children take circus classes there every week, and out of those half a dozen have continued to become professional circus artists. To celebrate their 20th, they have decided to re-imagine their first show ever with these professional artists and their partners. The show Rouge, will be played seven times at the théâtre de Marens in Nyon. The première is on Thursday the 25th and the show is on until Thursday 2nd of October, building up to the weekend of the 3rd-5th of October, which will be a weekend of celebration at the Caserne, next to the Perdtemps square.

Four different shows will be played by the different troups of the artists who started of at l’Elastique Citrique, as well as a disco party on Saturday the 5th with Time Machine, an 70’s-80’s disco and funk cover band. There will also be an open stage showcasing acts from some of the younger members of the school, and a big brunch on Sunday morning, followed by a ballon release to celebrate in style. Food and drinks will be catered by the team from “La Roulotte”.
L’Elastique citrique also created an act which was performed at the beginning of the Knie show which was in Nyon last week.
For the whole program and to book tickets for the shows and for the brunch, head to their website.
You can check out some of the artists performing in the show here 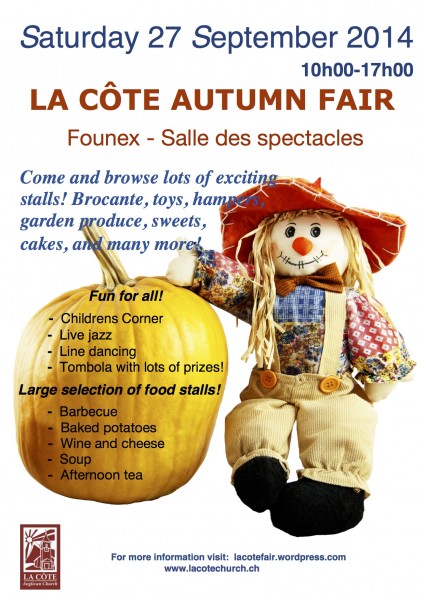 As a reminder, this Saturday, La Côte Anglican church is holding its  Autumn Fair in Founex. Check previous post for more information on the event.

New Paléo poster out!
Paléo has brought out next year’s poster. Created by an agency from Geneva, it’s actually three different posters, which link up as a big one, showcasing some weird creatures inspired by the wacky Paléo crowd. The line-up won’t be released until early April 2015, but week-long tickets will be on sale in December, and are a perfect Christmas gift.