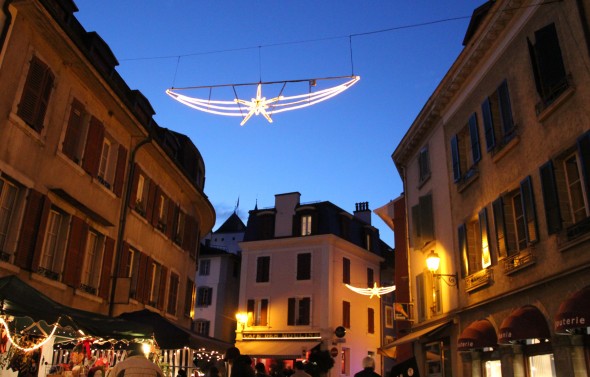 Tuesday 20th and Friday 23rd December are the two dates this year when it’s the “Nocturnes à Nyon” (late night shopping). The shops will be open in the town until 22:00 to get those last minute Christmas presents.

Meanwhile over at the Signy shopping centre on Saturday 17th December, between 10:30 and 17:00 and Wednesday the 21st between 14:00 -18:00, “Father Christmas”  will be on hand for those children who want to have a photo taken with the man himself.

Two lakeside events this weekend plus other events.

Saturday market in Nyon – Living in Nyon will be at the market on the 17th December with a stall selling the book “Living along Lac Léman” (please note there will be no stall in bad weather). The book is also available for purchase in Nyon in the “The Reading Duck” , Catambo, Payot Nyon, Payot Geneva, see here for all retail outlets.

Also Saturday in Place St Martin in Nyon from 13:30 to 18:30  “Un million d’étoiles”. L’Association Asolac and Caritas Vaud will be lighting hundred of candles in the square. Each candle bought by a member of the public will go towards the charity.

La Côte column.  The Living in Nyon column in English  (that appears in in La Côte newspaper each Friday) is today entitled “Talking Turkey” . This is the last column of 2011 and the next one will appear on January 13th 2012. Note:  La Côte recently launched an “app” facility enabling subscribers to access local news and information from their phone. See site for more details. 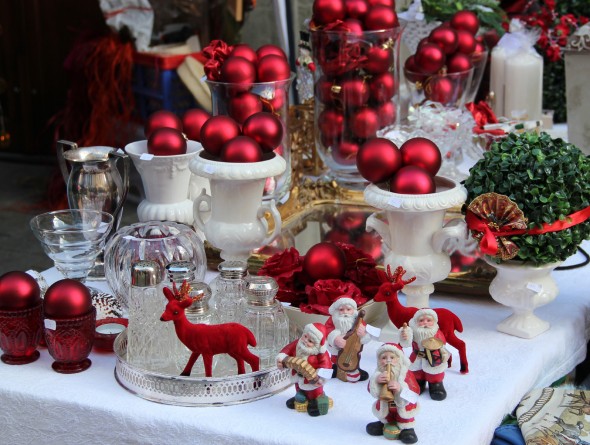 Saturday 17th it’s the “Bains des Lumières” down by the lake. Soup and vin chaud will be served from 18:00 to 21:00  at the Plage de Trois Jetées.  There will also be a light display by Sophie Gayot. Free entry to the sauna at this event. See the site for details Note: If bad weather on the night the event will be cancelled.

On Sunday 18th it’s the last Puces de Nyon (flea market) of the year also by the lakeside. An ideal opportunity to pick up an unusual Christmas gift from one of the stalls.

Church Service in English at La Côte Anglican Church in Gingins.  Also on Sunday there will be an all age Holy Communion with Christingles followed by festive refreshments – mulled wine and mince pies – at the “stand de tir” further up the road.

“Les Hivernales” the winter rock festival which takes place in several venues across Nyon in February revealed its line up this week.  With a mixture of bands from around Switzerland such as Portobello, The Bianca Story, The Mondrians and bands and singers from the U.S.A  such as Grouplove and Nadéah from Australia, the festival will take place from the 9th -12th February. Tickets go on sale  from the 21st December. See Les Hivernales for more details and ticket prices. More info on this festival coming up on this site.

See the video teaser below for an exerpt of the music and bands coming to the festival.