November in Nyon and area. Events to look out for

Two events next week coming up next week

The Mayuri Dance Group will be performing at the Aula/Marens school at 20:30 to support The Maisons des Enfants. Indian “finger food” served on the night.

The Maison des Enfants is a charitable association set in a large house just on the outskirts of Nyon and is open for all children from age 6 to 12. Here children are looked after by professionals and volunteers and all free of charge. The house has a large garden, so the children can play outside and create handicrafts, have the use of use computers, etc.

Such is the popularity of the scheme the number of children using the “Maison” has grown considerably (up to 40 a day) over the last year. To cover the costs of the Maison they organise various fund raising activities, and this one on Saturday promises to be a good night out whilst supporting a worthy cause.

The small music club Club 1306 down in the old town will have a performance by the Michel Tirabosco Trio at 20:30. Further details see Club 1306

will be holding their biennial, day long Bazaar in the Salle Communale in the centre of town. This is a big charity raising event and well worth attending. More information to follow.

from the 14th October.

Sunday 26th October sees the monthly flea market down at the lake.

will be holding a business luncheon at the Hotel Beau Rivage in Nyon. 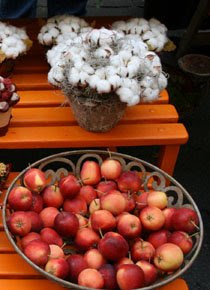 The weather has started to get a little chillier in the evenings and Autumn is now definitely here. However there are some colourful seasonally related events in the Nyon area to brighten up the shorter days.

Yesterday (the 18th September) saw the start of La Semaine du Goût (Taste week). Ten days of various food related events across the whole of Switzerland until the 28th of September. There are activities happening around this area from wines tastings in the village of Begnins, tastings of exotic confectionary in Coppet, to cooking courses in Bogis Bossey. There is a full guide with comprehensive listings of what’s on where in Nyon tourist office.

Next Saturday the 27th there are two events that are great to go to in the same day.

First of all in the morning it’s the “Desalpes” in St Cergue. This is when the farmers bring down their cows from the mountain to winter them in the barns. The cows with bells on (of course) are decorated and paraded through the village, led by the farmers dressed in traditional Swiss costume.

There is folk music, Swiss flag turning (this is an art), stands with food and wine for sale. Here is the link to the information flyer St Cergue,

it’s in French but easy to understand.

At the bottom of the flyer there’s a list of the trains that leave Nyon to go up to St Cergue for the Desalpes. Taking the train is easier than trying to drive as the road can be busy that day.

It’s a great event to take children and visitors, but you will have to get up early, the first lot of cows descend at 08:30, there are others later in the morning but then it ends. Remember to wrap up well, there is quite a bit of standing around and it’s often a few degrees colder up in St Cergue but the trip up there is worth it. 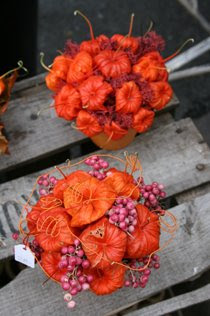 Once you have been up to the Des Alpes then come back down in Nyon for not one, but two Autumn fairs which will be going on in the town! The first one is the town one which is always a very colourful event with vegetables, fruit, and a variety of stands with produce. There’s usually someone serving hot soup too. This year I notice there will be a decorated pumpkin competition in Place St Martin. For the second fair, see the end of this post. 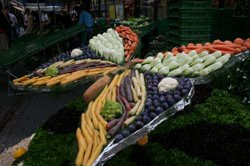 has a new temporary exhibition called “A La vôtre/Zum Wohl! Salute! about the history of beverages in Switzerland since the end of the Middle Ages.

Here’s the information below from their brochure.

“What did wine taste like under the Ancien Régime? When do the first mineral waters date back to? Who benefited from phylloxera and the subsequent devastation of the vineyards? Since when has milk been considered a typically Swiss product? There are a host of questions which this exhibition attempts to answer by a captivating display of 150 works of art and everyday artefacts, some of which are quite unusual.

In keeping with the theme of the exhibition a choice of vintage drinks will be offered: come and try out maidenhair cordial, hypocras cordial and other beverages! From 2.30 to 4.30 pm at weekends a wine-waiter/guide will be there to serve you with both refreshments and information.”

Finally, two other events to look out for

There’s an Autumn fair in Nyon on Friday 26th September and Saturday 27th September in the Salle de la Colombiere in Nyon from 10:00-16:00 There will be a bistro, a variety of stalls, Indian food, home made jams, hand painted furniture, haute couture, including a special appearance by Hester Macdonald the Garden Doctor from World Radio Switzerland. 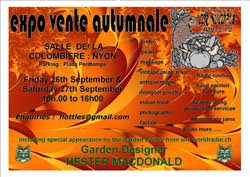 A little further away from Nyon – On Saturday September 6th Morges tourist office is organising a “Stroll along the vineyards of Morges”: A route with different stops in four wine cellars where you can taste wine and regional meals in a magnifique landscape

It’s in English and you can book online if you go on their website. The production will take place here in Nyon on Friday 29th, Saturday 30th August and Sunday 31st. These Really Youthful shows are great fun, very well produced and are always guaranteed to give a good afternoon (or night) out. More details on the production and photos to follow in the next few days.

There will also be a”Mome” market in the centre of town. This essentially is for young children with various activities planned from around 09:00 onwards. There will even be a little disco for all budding dancers!

Paleo – One of Switzerland’s biggest rock festivals is now over boo hoo!

But don’t forget Rive Jazzy still goes on until the 10th of August. Free music performed by bands on stages in the open air with a variety of styles from modern to trad jazz, Eastern European etc.
It all happens down in the old town and on the “Rive” (by the lake).

Check out the website for the full programme. Great to go have a meal, or a drink and simply soak up the atmosphere. Nice. 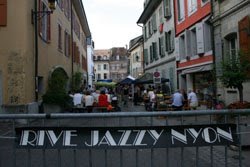 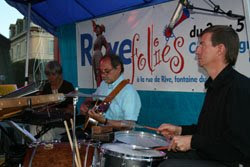 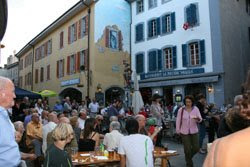 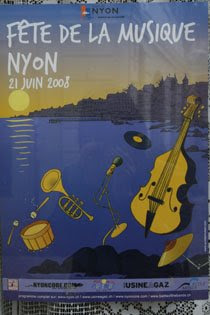 This Saturday 21 June, it’s La Fete de La Musique in Nyon. Lot’s going on for different musical tastes, whether you prefer classical, reggae or rock. It all starts at 12:00 and goes on until the wee hours. It’s also the “longest day” so it’s perfect timing.

There’s also a Howard Productions theatrical production of William Shakespeare’s “Merry Wives of Windsor” going on over at the Chateau of Prangins on the 19, 20 and 21 June.

Here’s the programme for the music festival.

There will be classical music too in the Abbeye de Bonmont.