Autumn is back, which means going back to school for the young ones (not much fun), but also the new cultural season for all venues in Nyon (loads more fun). We are lucky to have a rich cultural offer in Nyon, between the theatre and concerts at l’Usine à Gaz, the Conservatoire’s classical concerts and La Parenthèse’s edgy musical discoveries. Here are a few shows coming up in Nyon.

Swiss band Adieu Gary Cooper will be giving a free concert on Friday the 12th, as part of the café-concert promoting local bands.

Saturday 13th sees the return of the venue’s now famous DJ nights, “Coquillages et crustacés”, as part of their 20th season. Come and dance to two decades of hits through the night. The evening is free to all born in 1995.

On the 20th, Motel Tour is organising a US Car Show. The event starts at 4 pm – join with your pre-73 American creature !
The evening will continue with a movie session at 9 pm – a unique chance to see Kiss Me Deadly (1955) on a wide screen, before ending the night with DJs The Sons of the Desert playing true rockabilly tunes.

The venue located in a reconverted wine cellar hosts free concerts twice a week. Their program is eclectic and made of the best of the new bands on the independent scene, from rock to psych-pop and folk. A lot of the bands who play in this venue then go on to play at Paléo and get quite famous. Look out for a number of collaborations with festivals and other venues during the year, which will bring some diversity and fun to the town. You can get a taste of the first of these collaborations on Thursday the 11th of september with American band Quilt‘s psychedelic grooves and pop harmonies, presented by La Batie festival, a contemporary music and theatre festival taking place until the 13th of September.

On Thursday the 18th Dan Sartain, hailing from Alabama, will rock the venue before a DJ-set on the 19th.

Canadian band The Besnard Lakes, who have played with the likes of Godspeed You Black Emperor among others, are on on Saturday the 20th. Their psychedelic pop, inspired by an eclectic aray of styles, from the Beach Boys to post-rock, has made them minor celebrities in Canada.

The next concert hosted by the Conservatoire de Nyon will take place on the 26th of September with jazz quartet Zatar, at 20:30. 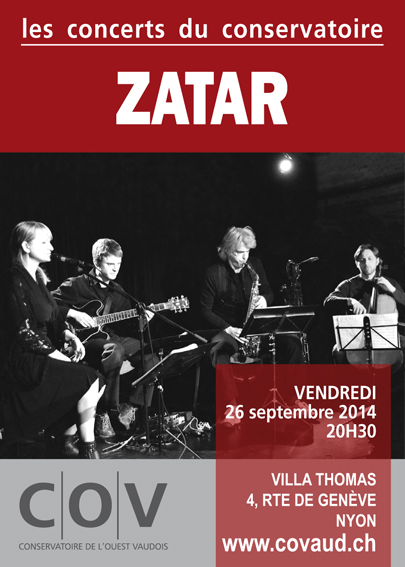