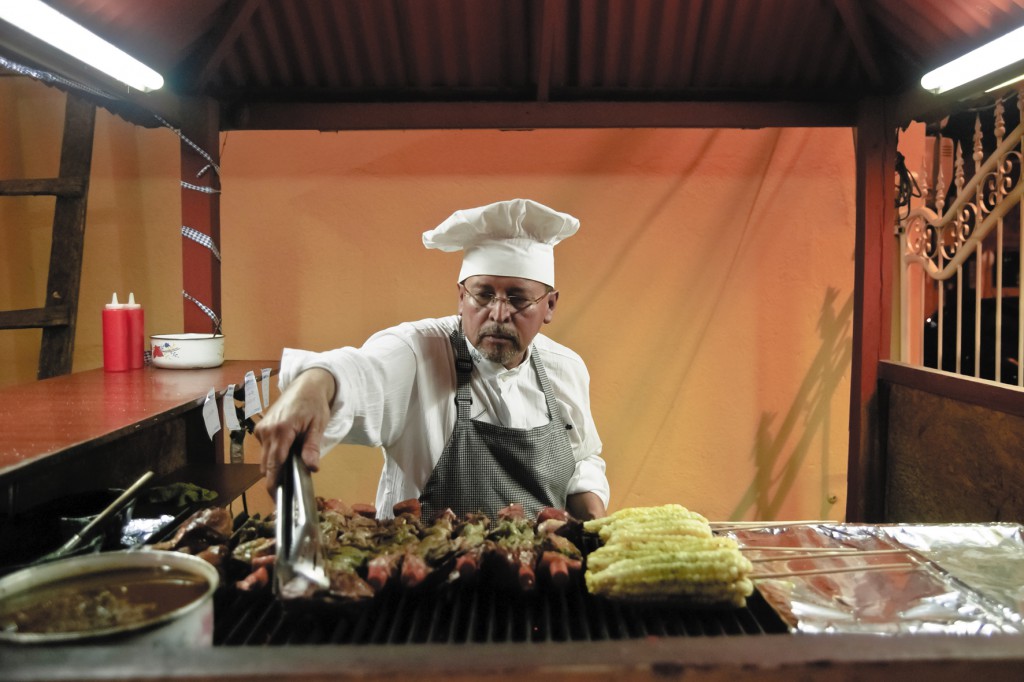 The director of the film Cesar’s Grill – Dario Aguirre is living happily in Germany until his father asks him to return to Ecuador. His restaurant and grill is close to bankruptcy. Aguirre, who has meanwhile become a vegetarian, gets involved with the ailing family business.

What happens next is the main premise of the film and it’s a fascinating and very personal story. We see Aguirre go  through a whole gamut of emotions, sadness, laughter, and frustration at being back in his home country and we the audience are taken along with him. He  suggests to his father that if he opened the business at an earlier time of day he may attract more customers, he creates an Excel spread sheet for accounting purposes, he even suggests that his father should buy food from a wholesale market not a retail one, all to no avail. His father is stuck in his ways of doing business and nothing will change his mind despite mounting debts.

A snapshot of life in Ecuador

From the opening humorous shot in this film of a customer in a barber chair’s in Ecuador, this film sets the tone of what’s to come,  it is beautifully filmed and engaging from the start. Occasionally interspersed with Aguirre’s own music, (he plays the guitar), he sings out some of his frustrations to camera, these add an interesting touch to the film.  We also get to see a snapshot of life in Ecuador – Aguirre and his family sweeping up layers of ash after a nearby volcano has erupted,  the celebrations for New Year near to the family home, the customers in the restaurant. Aguirre conducts a bit of market research with them and asks them what improvements they would like to see in the business ” Faster service would help” says one,  “More space in the dining area” says another. Aguirre talks to his father about knocking a wall down in the dining area to create more space, when they then  speak to a workman about it and Aguirre  asks, “but is it safe to knock down this wall?,  the workman replies “I don’t know, we will just have to see what happens”, this got a big laugh from the Swiss audience watching the film, an audience presumably used to perfect construction techniques with nothing left to chance.   When Aguirre travels to the countryside with his father to learn more about his  father’s childhood to get to know him more, they travel through beautiful scenery,  giving another fascinating glimpse into the country.

Cesar’s Grill is a lovely film, well worth watching.  It gives off a warm glow long after the flames have died down.  This film is entered into the “Etat  D’Esprit” category of this film festival. A film that does indeed lift your “spirit”.