In English we call it Bingo, in French it’s Loto, and this month you will see a lot of posters advertising “Lotos” taking place around the area. They are organised by the many charities and clubs as their main fund raising events of the year.

They are very popular events and last week Living in Nyon went to one organised by the Twirling Club of Nyon in the Salle Communale (which was packed with loto players). There are various prices of tickets you can buy to win different prizes. You have to have a completely a full card of numbers to win, you shout out “quine” when you have one line, “double quine” when you have two and “carton” when the card is full. 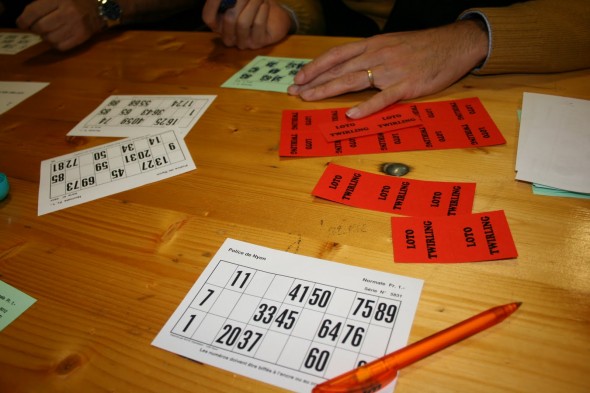 It’s a great way of practising your French (in particular your numbers)! However beware, the numbers are not repeated when they are called out, the caller quickly moves on to the next one so you have to be quick off the mark. While the numbers are being called out there is no talking going on, concentration is required! If you play one game and want to play another then the club have members walking round handing out new cards (you pay for a batch of tickets at the entry which entitles you to so many cards). It can be addictive and it’s fun, there are usually snacks available too. Even if you don’t win anything its something to do on a snowy weekend (they take place on Fridays, Saturdays and Sundays)and you are contributing to a good cause! For example, the lake rescue loto is next week.

Children can take part too so take them along, prizes tend to be for adults, food, wine etc, but last week the main prize at the Twirlnig Club was a mountain bike!

Here’s the list of lotos with dates and times in Nyon in January and February, have a look in your village or town for a Loto near you.

Big Burn up in Gland

The annual Gland Christmas Tree Burning is happening this Saturday 9th Jan. from 10:00 to 12:00.

It will be held at Le Grand Champ – the big open field behind the Collège en Grand Champs, between Rue des Tuilleries and Ru due Collège. The local fire department will be there to manage the burn-up. There will also be bread, cheese, hot Vaud sausages (cooked in the embers of the burning trees) and drinks provided by the local Gland community.
A chance to bring Christmas trees and other dried up Christmas decorations, throw them on the pile and be part of a cheerful and burning-bright occasion. Everyone is welcome, even if you do not have a tree!

Note: The offical website of the town in Gland has certain sections of it written in English. Take a look.

Plus: An American  resident of the town of Gland will be writing a post on this site about what it is like to live in Gland, so watch this space!