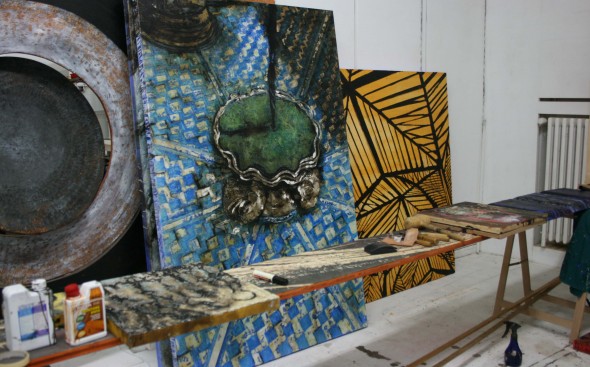 Along the Route de L’Etraz in Nyon lies a set of ateliers (workshops) and at number 20 A (5) is the studio of renowned Nyon artist Bernard Garo.  Garo is well known in Switzerland for his art, photography and installations and although he lives and works in Nyon,  his eye is firmly on the rest of the world. His global vision inspires him to travel to other  countries not only for his art, but also to bring back materials to create it.

Ash from Stromboli, Red Earth from Tarragona – all inspiration for Garo’s creations.

Whether it is using volcanic ash that he collected from Stromboli (the Italian volcano), red earth from Tarragona in Spain, crushed black glass or sand from beaches across Europe, all are used in his art and literally on his art. Much of his work is textured, inviting the viewer to feel it, look at it close, but then to step back and look at it again from afar.

Photo below: The Workshops in Route de l’Etraz in Nyon. These will be open next weekend (see below). 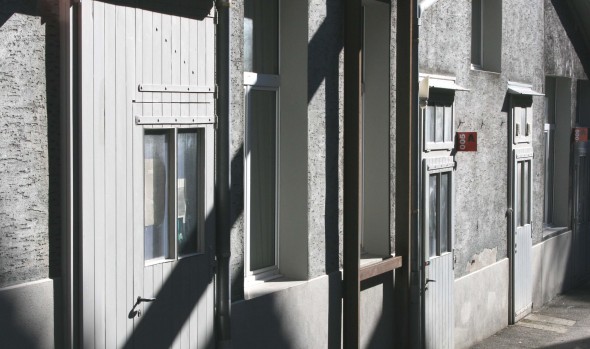 Which the viewer must do to appreciate it all as like the man himself, his art is big, (Bernard is over 2 metres tall).  Massive canvasses grace the walls of his workshop, canvasses with work in progress, canvasses finished and ready to be shipped to a client, canvasses with just a gem of an idea on them.   Garo can be working on over 20 paintings at one time, such is his enthusiasm and passion.

“Sometimes I drive myself crazy with all the ideas I have in my head for a new painting, I can’t stop” .  Helped by an art student he is constantly working in his studio. “I have to be an artist, it’s not a career choice, it’s something I have to do, it is in my soul”. 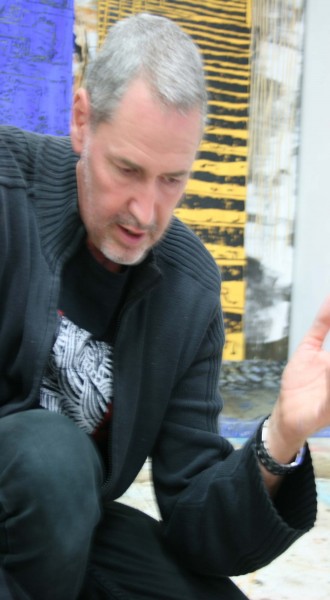 Garo urges the viewer to look up or down at his art, not always straight on;  “it makes it far more interesting to look at it from a different angle. Many people just see what is in only in front of them, they forget to  look up at the sky or down at the ground. They miss a lot if they do this. I am trying to encourage us all to think differently”. 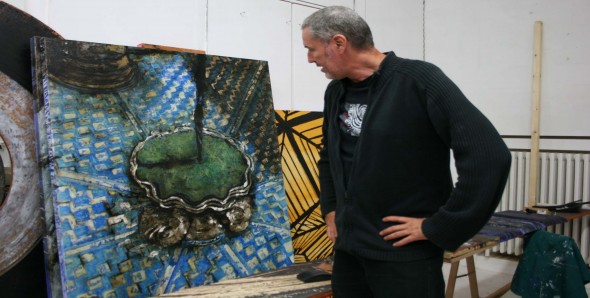 Garo has been commissioned to produce pieces for various private clients and public institutions.  His “M20” installation is in the metro underground station in Lausanne, he has an outdoor installation called “Waterproof” in the Piscine de Monthey, a work  in the private collection of the research centre of Nestlé. He has also won many artistic prizes including winning  the Artistic prize of Nyon back in 1994. You can read more about the man and his work on his own site. 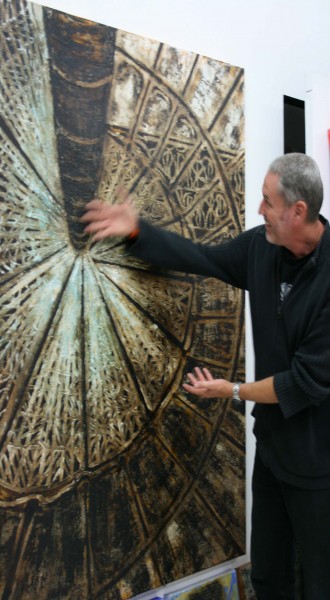 Bernard admires the works of other artists and sculptors such as Anthony Cragg (UK) and Anish Kapoor (India), Anselm Kiefer (Germany), Miguel Barcelo (Spain) and many more. 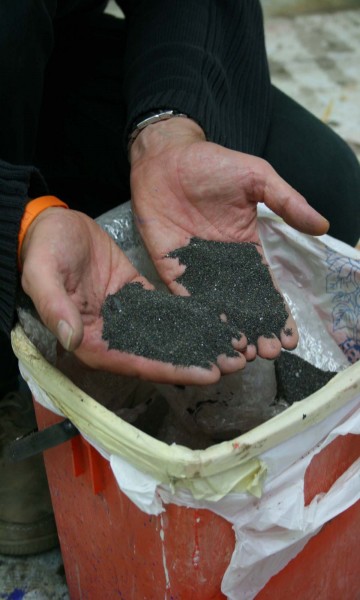 Photo above – Ash and other natural materials from the earth are used in his art.

Bernard speaks English and he will be  more than happy to chat to Living in Nyon readers about his work.

There is also an exhibition of his work entitled “Lisboa the unquiet” at the Galerie d’art Junod in Grand Rue in Nyon. Opening times here 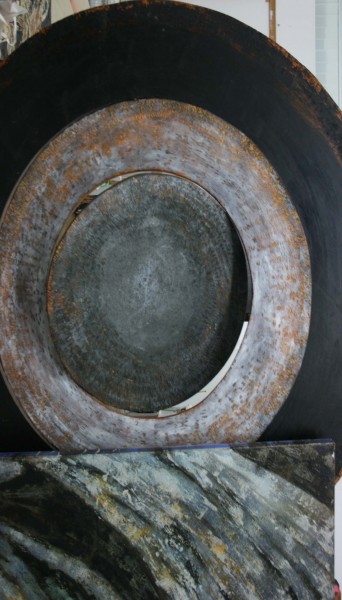 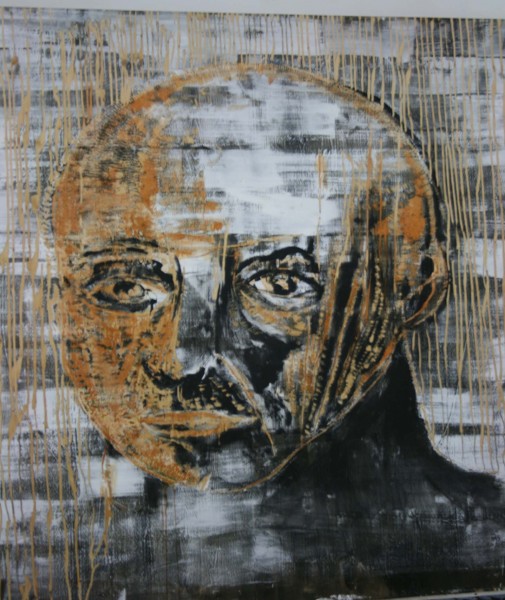 Footnote: Encouraged by the artist to look at objects, paintings and the world from a different angle, Living in Nyon did just did this and took a photo of the  shoes and the tools he uses while at work – a work of art in themselves. 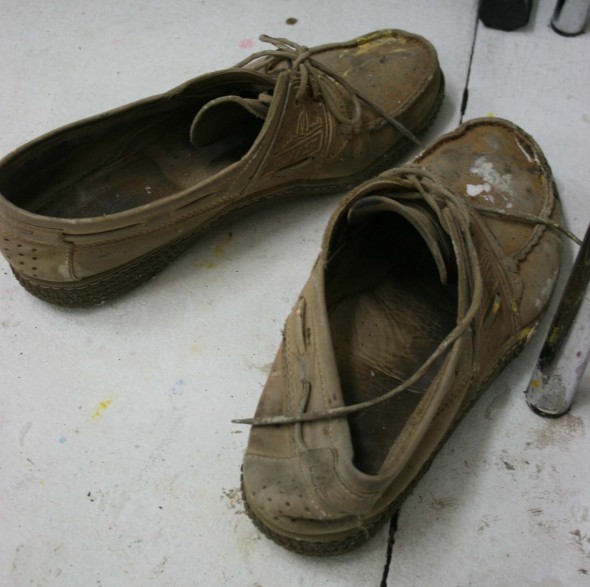 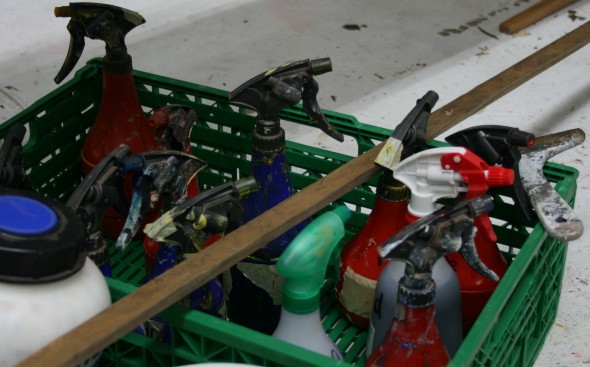 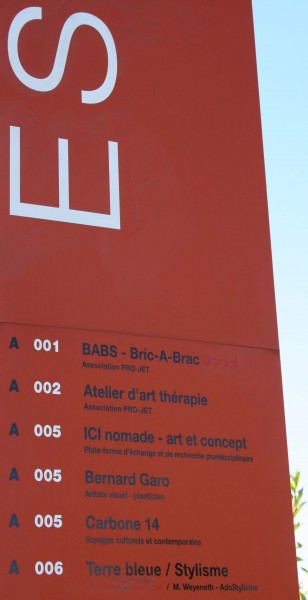